Radar is the most important sensor for autonomous driving. A high spatial resolution capacity is achieved by using a large number of antennas that all have to be connected with individual ports of integrated radar ICs. When laying out the complex high frequency connection networks, the printed circuit board technologies used so far come up against their limits.

The vision of autonomous driving is now within reach. This is made possible by the intelligent fusion of a series of different active sensors such as LIDAR and radar as well as sensors based on ultrasound in combination with passive sensors such as cameras, accelerometers, speedometers, receivers for the global navigation satellite systems (GNSS) in connection with digital maps and the vehicle's data exchange with its environment (car-2-x communication). Radar plays a special role among the active sensors. Some of the advantages – besides the relatively low costs – are its all-weather capability, the range, and the variety of information that can be extracted from radar signals.

In radar engineering, a large number of different procedures is known that can be used to determine the position, speed, and special properties of a single object and to separate multiple objects from each other. In the automotive sector, a combination of frequency-modulated continuous wave signals (FMCW) for the determination of the distance and radial speed with a direction determination based on the comparison of the receive phase of several receiving antennas (digital beamforming) has established itself due to cost reasons. Separate transmitting and receiving antennas are usually used for this. The minimal configuration consists of one transmitting antenna and two receiving antennas. The receiving antennas are arranged at a horizontal distance of half a free-space wavelength. This way, under ideal conditions, individual objects can be detected in the horizontal plane. To counteract deteriorations of the wave propagation conditions, for instance those caused by an antenna cover (radome) or an additional plastic cover (manufacturer's emblem, bumper, etc.), manufacturing tolerances, or dirt, and to be able to separate multiple reflections in the same radial distance at different angles, usually three or more receiving antennas are used. The arrangement of the receiving antennas can also be staggered in the vertical direction. This offers the possibility of also measuring the height of objects above the ground.

Finally, the next configuration level uses several transmitting antennas at different positions. Through the smart spatial distribution of the transmitting and receiving antennas, a virtual array antenna can be generated according to the multiple-input/multiple-output (MIMO) principle. The spatial resolution capacity of this array antenna is significantly better than what would be possible with the real aperture of the radar sensor. The manufacturers of automotive radar sensors are currently working on systems with 12 transmitting and 16 receiving antennas, for example. The highly integrated circuits (MMICs) with FMCW radar signal generation und the corresponding receivers are currently offered by several large IC manufacturers such as Infineon, Texas Instruments, or NXP. These MMICs typically feature three independent transmit and four receive channels. As a consequence, one of the radar sensors mentioned above can be built using four of these MMICs.

Typically, due to cost reasons, printed radiating elements such as microstrip antennas or slotted surface-integrated waveguides (SIW) are used as antenna elements because they can be integrated monolithically with the radar MMICs and possibly other electronic components on the same printed circuit board. With the large number of antenna-elements the current generation of radar sensors wants to use, however, the arrangement of the RF lines between the MMICs and the antennas becomes a major challenge. Because of the large number of necessary layers, layer changes, and especially the transmission line losses, a solution based on printed, multilayer circuits seems unrealistic.

On behalf of the company Continental ADC Automotive Distance Control Systems GmbH, Fraunhofer FHR has developed a first step towards an antenna solution based on milled, metallic waveguides and sectoral horn antennas. To begin with, the complex feed network between MMICs and antennas was implemented as a layer structure in aluminum. A specially adapted cover made of radar absorbing material of the unused parts on the antenna side of the waveguide circuit is designed to simplify the installation of a radome and the integration in a vehicle. The full wave simulation and the measurement of the antenna properties have revealed a high radiation efficiency, a low mutual antenna coupling, and very smooth radiation patterns. The first radar experiments were very promising. The next development stage will now focus on the cost-efficient manufacturing with other materials and procedures. 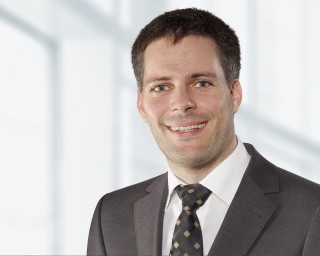